This article is in draft. If you have any additions or corrections then please email webmaster@sarasail.org.au.

See also our article about building a Hartley TS16.

In 1953 the first marine plywood trailable yacht designed for home construction, the Silhouette, emerged in the UK. The idea took off and by 1960 there were over a thousand sailing throughout the world. The concept was adopted by Richard Hartley in New Zealand who designed the Hartley TS16, and her big sisters the TS18 and TS21: a range of trailable multi-chined plywood yachts.

The TS16 was designed to be an affordable trailer sailor that could be built by an amateur with basic skills in their own garage. The original shape was based on a small New Zealand mullet fishing boat, adjusted in dimensions to fit a standard 1960s garage. Mullets were beamy boats that sailed well and were often raced. When Hartley saw the possibility of adapting mullet boat principles to a smaller, family boat, the wide-beamed, performance-oriented Hartley line of trailer sailers was born. They have been built in Australia since 1963 and in 1982, the Australian Hartley TS16 Association recorded 1,289 boats in its register and worldwide sales of plans approached 6,000.

The original Trailer-Sailer 16 being launched 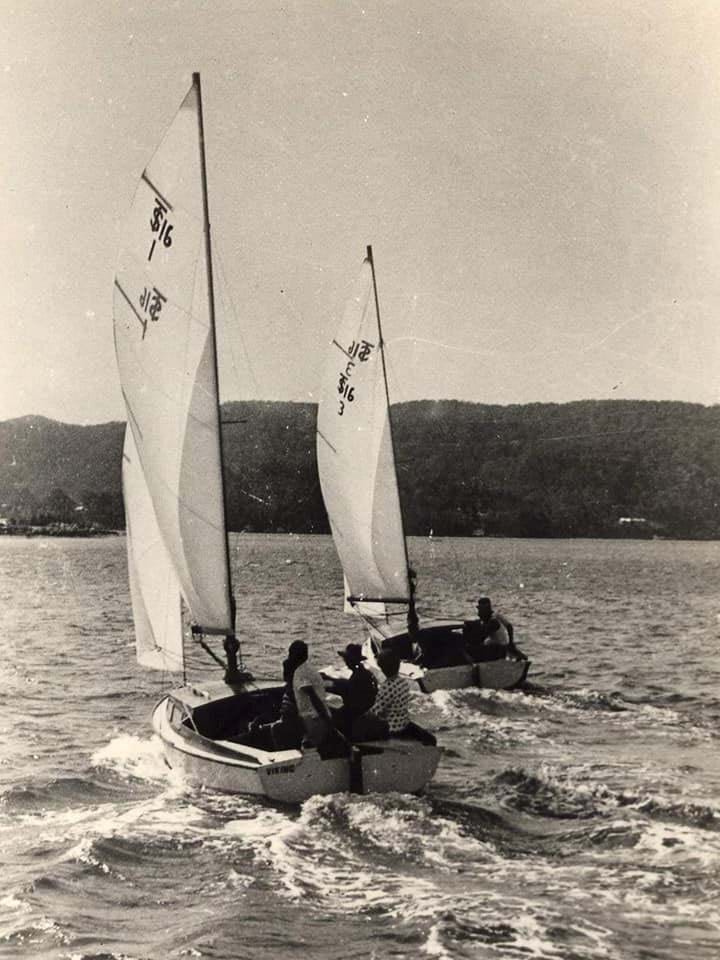 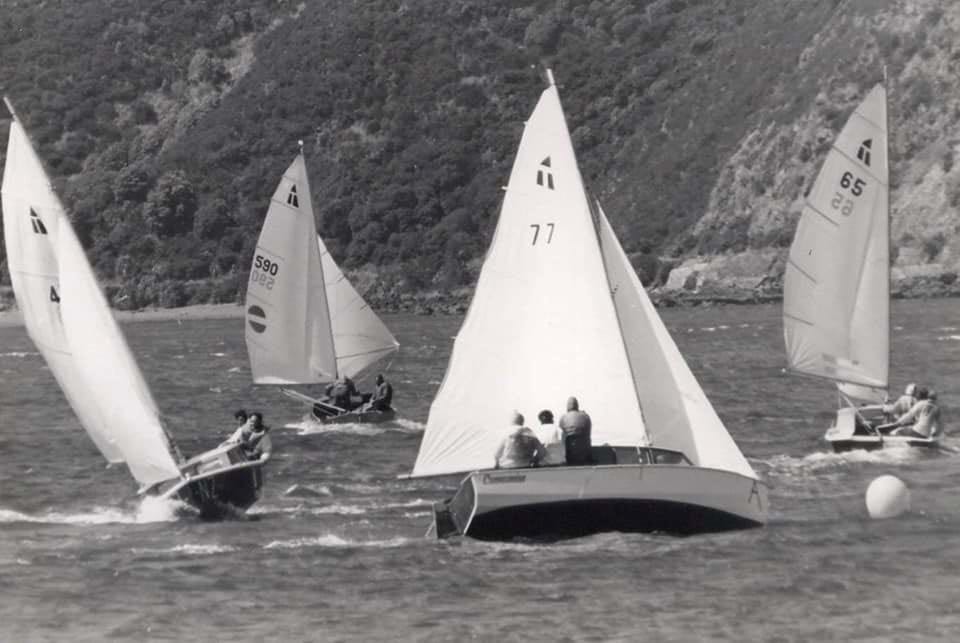 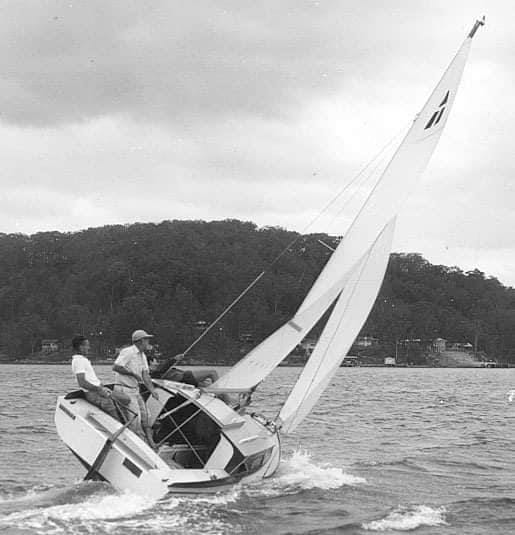 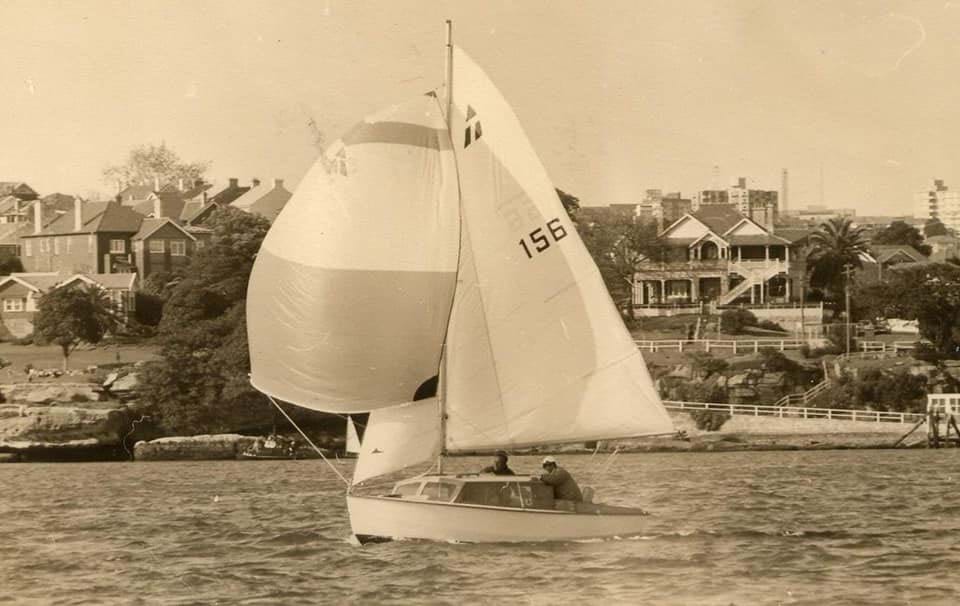 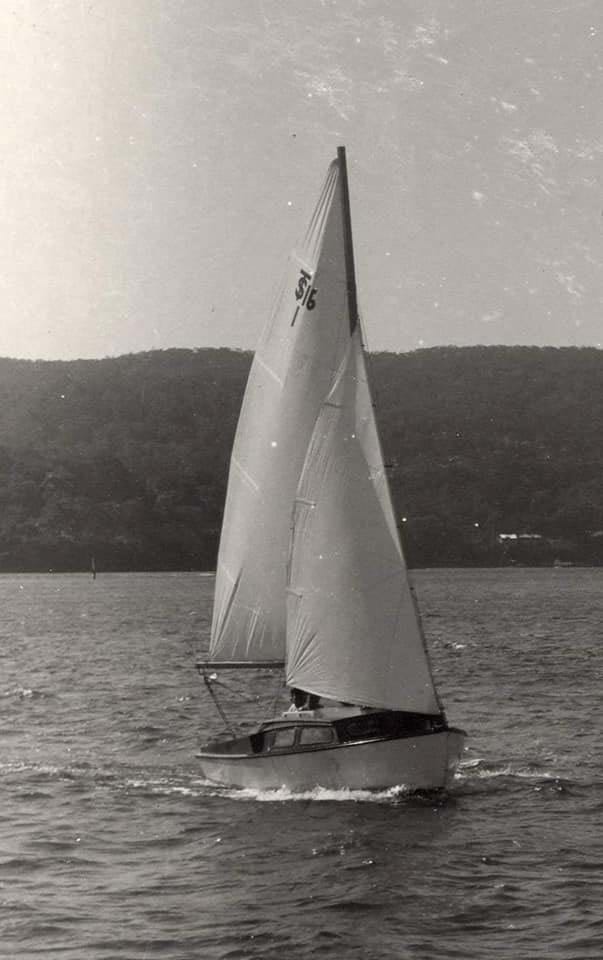 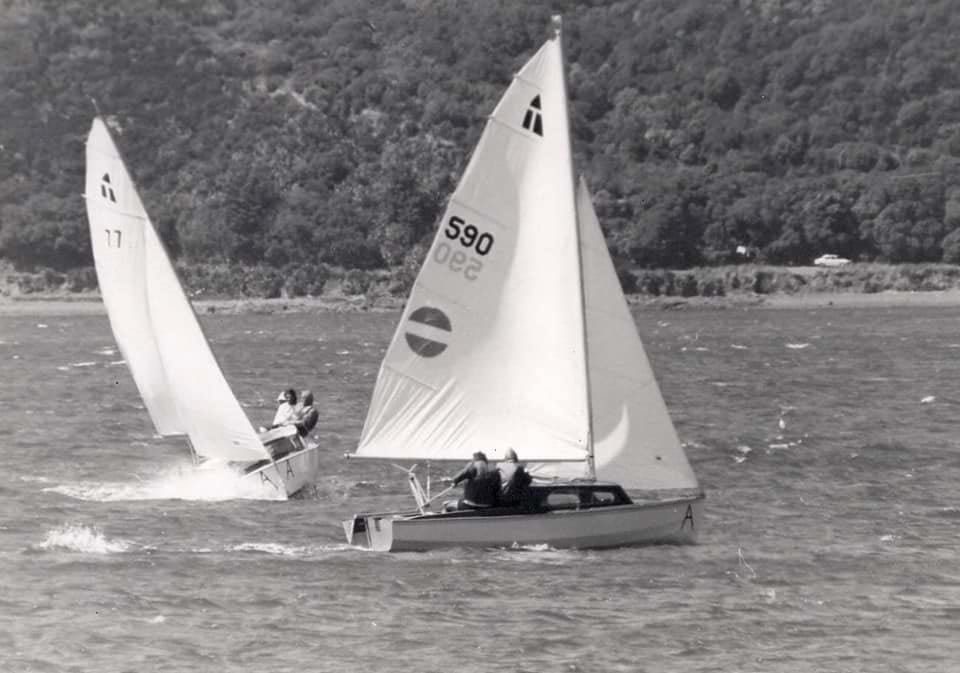 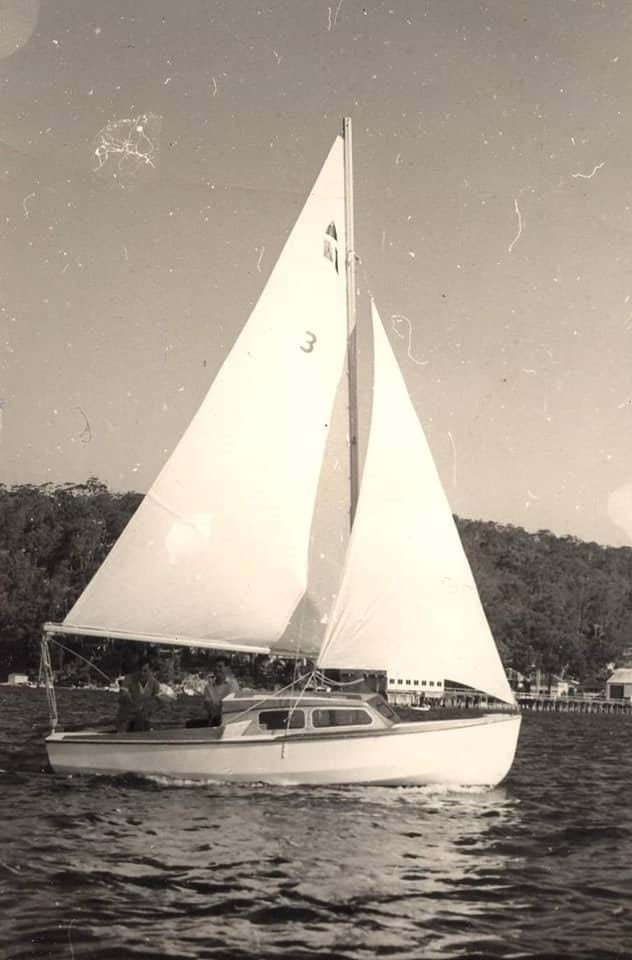 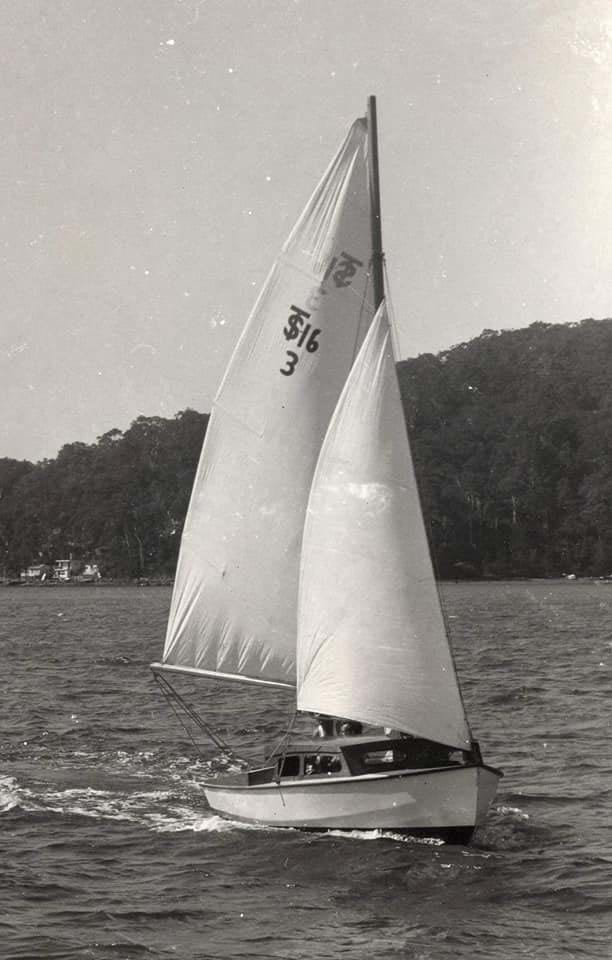 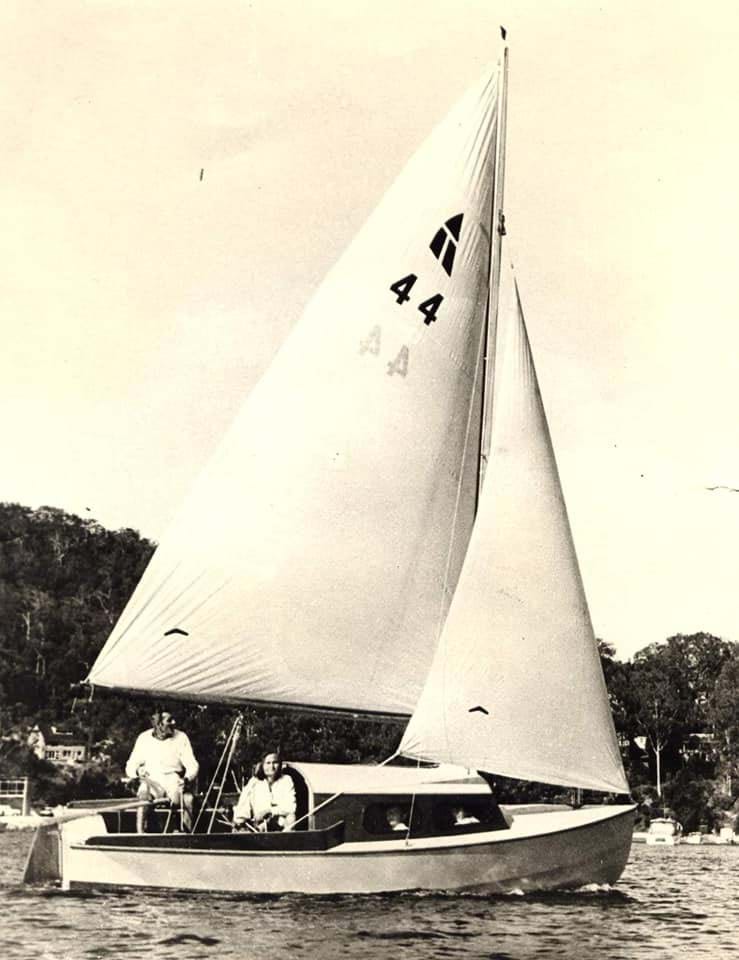 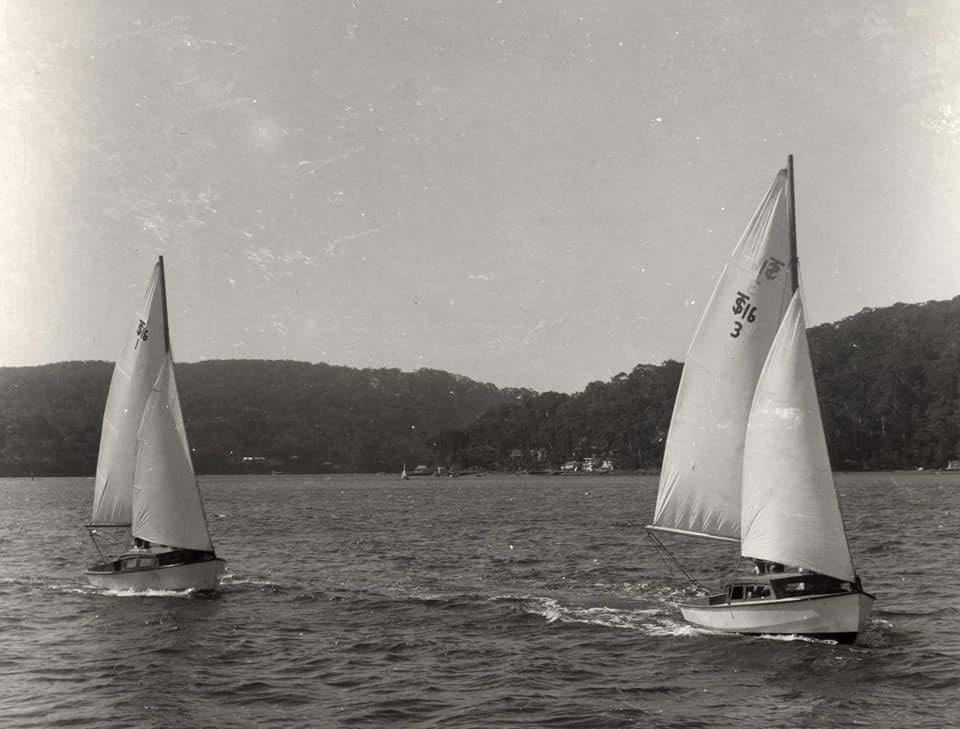 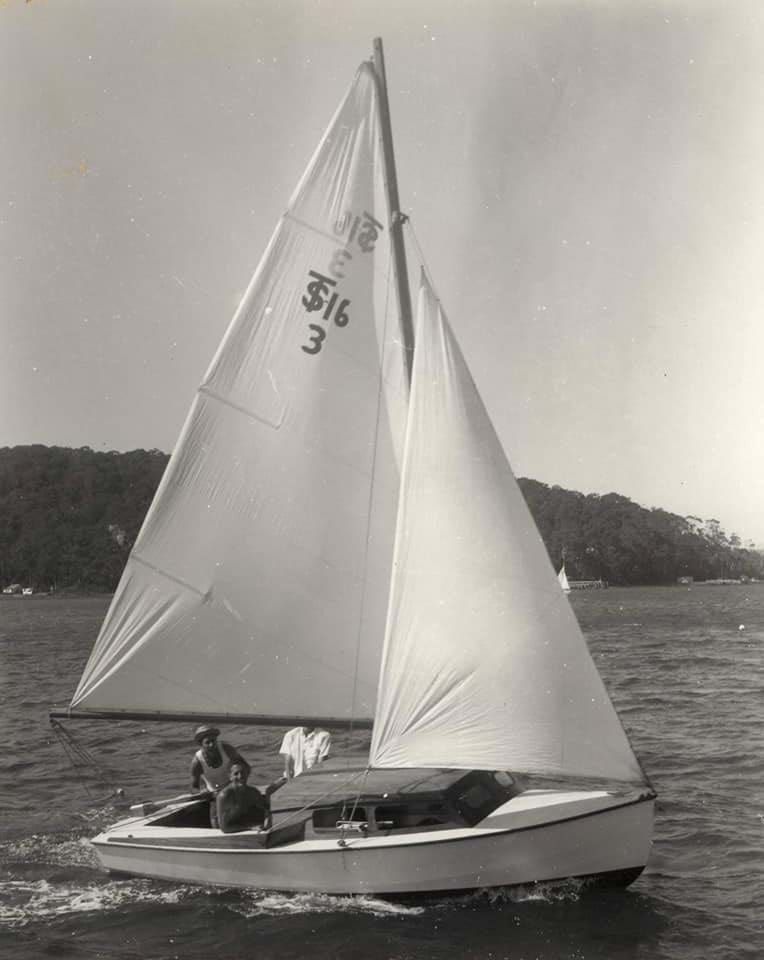 The Hartley TS16 is a clean-lined, trailable yacht that is light, easy to rig, launch and retrieve. It provides comfortable sailing for several people on a day basis, with bunks for two when cruising. With a towing weight of 454 kg including the trailer it could be towed by a small car and was easily handled. Many have been built by amateurs, although the arrival of fiberglass boats (see below) and increasing materials cost reduced the popularity of home builds.

The TS16 is raced with a crew of two. It carries 180 square feet of sail, which paired with its lightweight hull, means that it is very fast and exciting sailing, especially in fresh breezes. Race-tuned Hartley 16s are mighty hard to beat, even with larger boats. In Australia, their planing ability allows them attain speeds of 12 to 14 knots on reaches and runs, often out performing other boats. With two crew planing is possible on a broad reach in about 15 knots of wind.

The large cockpit area makes the TS16 a great day cruiser. Cruises organised by the Hartley TS16 Association are still being conducted in Victoria and New South Wales on a regular basis, but they have also been cruised in the Whitsundays, Darwin, Indonesia, Gippsland and, Myall Lakes. Ideally suited to inshore waters, the Hartley is an affordable family boat suited to teaching sailing and sharing the sailing experience as a family.

The Hartley TS16s have proved to be an enduring class with plans still being bought today. The only major changes to the original design have been replace and strengthen the wooden spars and rudder with aluminium. The jib halyard tension has also been increased to improve the upwind performance.

Check out our interview with Phill Watkin in July 2017 about building a wooden Hartley TS16 and his photos, and also the video on building an A-Class TS16 here: https://www.youtube.com/watch?v=wN-KpfKT4tM.

During the mid-1970s, Searles & Sons from South Australia embarked upon a project to build a fibreglass TS16 under the watchful eyes of Alan Hall, the Hartley TS16 Association measurer from South Australia. It was decided that TS16s should be ‘true to plan’ in hull and deck shape, with only minor variations allowable for fibreglass manufacturing requirements such as ‘mould release’. This keeps the boat’s performance equivalent to amateur built timber boats so they can compete. Despite the effort to create the hull and mould, Searles only made one boat, sail number 1084, original name, Nan III.

The moulds changed hands several times between 1978 and 1993. Throughout this time the Hartley Association kept watch to ensure that construction methods and materials were not to varied and the one design remained intact.

After 1993 the history gets a bit vague for a few years, however in 1996 the original moulds were bought by a consortium under the name of “Genisis” in Sydney including Wayne Sillick and Norm Thompson. Genisis built 6 boats (1538-1552).

Norm was a past president and keen member of Saratoga Sailing Club and an adviser and friend of many SSC members. He sadly passed away earlier in 2019. His advice on buying a Hartley TS16 is still relevant and available on this website.

Another mould was built, known as the “Wyong” mould, from an old design boat (see the image from the Hartley TS16 Association archives). The boats built from this mould don’t measure quite correctly to be certified 'A Class' and are thought to have inferior performance. The SSC fleet currently has none of these boats, but nonetheless has boats with different performance characteristics. Our handicap system can cope with any Hartley and make our races fun and competitive for all.

Going back to 1964,  just 4 years after the original design, the Hartley TS16 was granted permission to race at the Bayview Yacht Racing Association (BYRA) in the Pittwater,  joining the existing fleet of Stars, VJs., Moths, Herons, 505s and Fireballs. Initially they raced every second weekend with Hartley owners travelling there from all over Sydney.

Unfortunately, their growing popularity and rapidly expanding fleet caused friction with other classes, resulting in the club creating a new rule in 1966 that limited the maximum number of Hartley TS16 boats to 20, and giving preference to members who lived in the North Shore area. This excluded many Hartley owners as they came from central and western Sydney. The Hartleys then moved to various locations around the inner harbour starting with Chiswick, then Greenwich and finally settling at Drummoyne Sailing Club, where they still race today.

The first significant championship was conducted in March 1965 at BYRA called the Annual Championships as it was aimed at becoming a National Championships (but only had BYRA boats at this time). Richard Hartley presented the trophies at this event and mentioned that he never had expect the boat he designed from a mullet fishing vessel as a day sailor would become such a competitive centreboard racing craft.

John Ainsley attended the 1965 event and when he returned to Victoria he set up a Victorian Association around Port Phillip Bay, which was formed by 1966.

The Hartleys arrived in Saratoga Sailing Club and started racing there in 2000. SSC retains close links with Drummoyne and other clubs through the Association.

Hartleys today remain true to their origins as a simple lightweight boat that fits in most garages. They can be trailed, cruised and raced competitively and there are active racing series’ at club, State and national levels. Saratoga Sailing Club is proud to be part of the Hartley story, both in the past and into the future.

This article has been compiled from our own knowledge, a little hearsay, and a number of fascinating online sources that provide more information and further references:

Pictures and content are reproduced and cited from sources in good faith. If you have any objections to a citation, want us to correct something or add more details then please let us know.